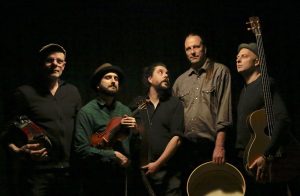 An Lár („the center in Irish Gaelic) is one of the most vibrant Celtic Folk bands in Switzerland. They play original songs and tunes inspired by folk music from Ireland and Scotland and one can also note influences form places like Asturias and Brittany.
Exciting arrangements, strong lead vocals and considerable skill on a wide range of instruments are typical features of the band.

2029/09/28 – After two decades of touring, An Lár released their sixth album DECEPTION in October 2019,  including the singles THE RETURN OF THE DEAD, BELLS and GÄBELBACHIANA, the latter featured in playlists on Spotify such as Celtic, Scottish and Irish Music / Painting in Music / World Music Fusion / Celtic Acoustic and Evening Acoustic.
It is the first An Lár album released by Elson Complex‘s label speedchill. 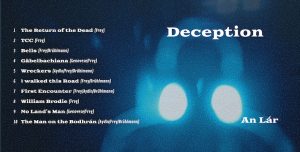 Deception, published by speedchill and the other An Lár albums are available in our SHOP

Video to THE RETURN OF THE DEAD
by Roman Droux

kms reviews:
„This, ladies and gentlemen, is not your everyday radio track, playing in the back and forgotten right after you heard it. The new release of Switzerlands celtic folk band An Lár is a carefully constructed and masterfully executed narrative, telling the story through classic instruments.
I am blown away by the captivating appearance of the tune. The single elements are played in a signature lightweight and playful fashion, creating a positive and uplifting atmosphere in the process. The sound feels like the single instruments wouldn’t just create a track to dance to, it’s as if the instruments themselves would be dancing with each other. The amount of chemistry between the band members is something that cannot be taught, it just feels magical to a certain degree to listen to the sound happen as if it was the easiest thing to do.
I admit it, I’m a sucker for classical instruments. Almost any of them. Played in a way where you can hear all the emotion transmitted from the soul of the player is when music reaches its full potential in my opinion. And if this happens, something instantly connects my mind to the sound. It triggers emotions, feelings, thoughts, memories, you name it – it just connects the dots in my mind. The mind is set in motion through the sound. Thats exactly what happens when listening to ‘Captivity Reels’. For me, the track is liberating what normally is held back.“